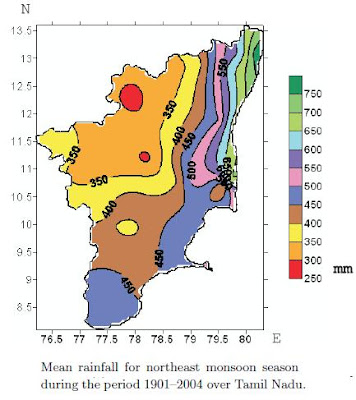 Tamil Nadu, located in southeast Peninsular India receives the major part of its annual rainfall during the northeast monsoon(NEM) season (the three-month period from October to December). While coastal Tamil Nadu receives about 60% of its annual rainfall, interior Tamil Nadu receives about 40–50% of annual rainfall during NEM season (IMD 1973). In comparison with Indian Summer Monsoon (ISM), the NEM is characterized by limited aerial extent and average lesser rainfall amount. During NEM season, Tamil Nadu generally receives rainfall due to the formation of trough of low, cyclonic circulation, easterly waves, low pressure area, depression and cyclonic storm over Bay of Bengal. Because the NE monsoon season is the major rainy season, the vicissitudes of the rainfall of Tamil Nadu state has led to considerable and widespread interest among the public/farmers and in government circles in recent years, in view of the frequent failure of northeast monsoon rainfall (NEMR) over Tamil Nadu and the consequent water scarcity condition. 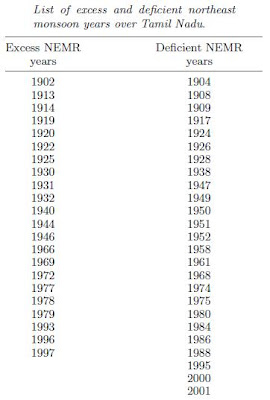 The NEMR series of Tamil Nadu during 1901–2004 was prepared as follows: The daily rainfall data of 173 stations in Tamil Nadu for the period 1901–1996 was obtained from National Data Center, Pune. Using this daily data, the seasonal rainfall series of Tamil Nadu subdivision for the period 1901–1996 was constructed. The data for the remaining part of the series was collected from the weekly weather report of Area Cyclone Warning Centre, Chennai (Tamil Nadu). As per IMD criteria, excess (deficient) monsoon years for subdivision is defined as whenever the percentage departure of seasonal rainfall from normal of subdivision is more (less) than +19% (−19%). Using this criteria, the excess and deficient NE monsoon years during the period 1901–2004 were identified. During this period there are 22 excess NE monsoon years and 25 deficient NE monsoon years and these are listed below. 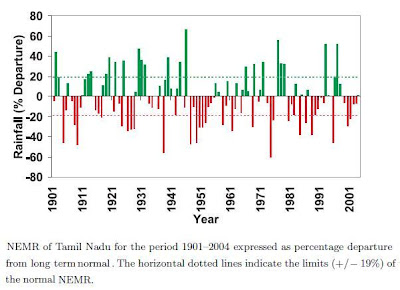 Tamil Nadu receives mean rainfall of about 450mm with coefficient of variation 28% during NEMR season. Figure shows the mean rainfall distribution over Tamil Nadu during NEMR season. During the entire NEM season, northeast coastal Tamil Nadu receives rainfall exceeding 600mm. Generally rainfall decreases westwards from coastal area to inland and from north to south. Figure shows the NEMR of Tamil Nadu during the period 1901–2004 expressed as percentage departure from long term normal. Out of 104 years of present study, NEMR over Tamil Nadu was below normal for 54 years (i.e., about 53%). The NEMR over Tamil Nadu was continuously below(above)long term average for a maximum of 9(4) years. Ropelewski and Halpert (1987) found that NEMR over south Tamil Nadu is enhanced (diminished) during the well-known El-Ni˜no episodes that refer to the events of warming (cooling) over central and equatorial Pacific Ocean. Out of 24 years of El-Ni˜no during the period of study, NEMR was normal or excess during 23 years (except during the year 1951).