Whenever people in India ask for wettest / Rainiest places they only know Cherrapunji or Mawsynaram or Agumbe. In these series, you will come to various places which i have identified to be wettest places of India. This series will be published every weekly. If you are fan of Heavy Rains and want to know more than Cherrapunji. Please Read it. Its only a compilation of data from various sources / articles / research materials.

Hulikal is a village located in the Hosanagara taluk of the Shimoga district in the Indian state of Karnataka and is known for its heavy rainfall. It is situated in the dense forests of the Western Ghats. Hulikal is heaven for nature lovers because the place is ultimate package of unlimited natural beauty. The real beauty of Hulikal can be seen only during in rainy season when small waterfalls come alive during monsoon. These waterfalls take birth during rainy season and vanish after the monsoon. Most of the waterfalls are beside the highway.  These temporary waterfalls do not have any name and they are very easily accessible. Here rains pour throughout the day without a break. Dense forests, small and attractive waterfalls provide rich treat to the eyes of those who pass through the road. 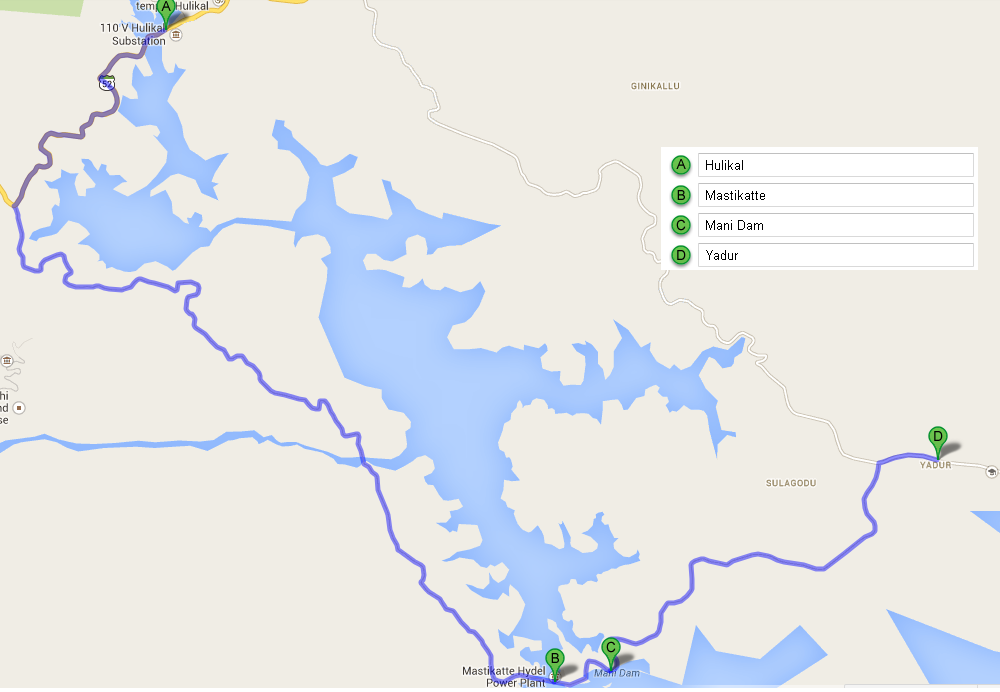 Kunchikal Falls is located very close to Hulikal and falls from the height at about 455 meters. It is India’s highest waterfall. The Kunchikal Falls do not directly drop, but jump through a lot of rocks and boulders. The Varahi River cascades down hundreds of rocks near Hulikal or the Ghati Temple.  After construction of Mani Dam near Masthikatte and underground power generation station near Hulikal, the flow of water is greatly reduced and visible only during rainy season. 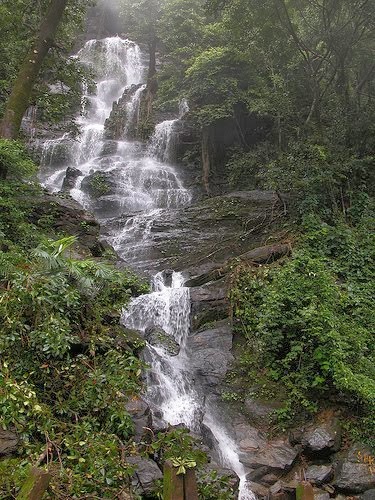 Baalebare Ghat also called as Hulikal Ghat is just 6 kms from Hulikal. The ghat sits right on the edge of the mountains overlooking the densely forested valley is like a balcony from where you can enjoy the panoramic vistas. Farther down the little towns of Hosangadi taluk appears as tiny specks amidst a sea of green.


Road side falls near Hulikal

Hulikal has been receiving more rain than Agumbe (which is called as wettest place in Karnataka) in most of the years. In the rainfall recorded in the last 23 years, Hulikal has beaten Agumbe in 18 years barring 1995, 1996, 2003, 2005 and 2008. Hulikal has also received more number rainy days than Agumbe between 2008 and 2013. No doubt Hulikal is wetter than Agumbe. There are also other places which get heavy rainfall. One of which is Masthikatte, it sometimes receives more rainfall than Agumbe. The other places are Mani Dam and Yadur. While the Hulikal annual rainfall is over 8000 mm. Masthikatte annual rainfall is around 7700 mm. Mani Dam and Yadur gets around 6700 mm rainfall. These 4 places together makes it one of the wettest stretch in India or even in the world.


Available Rainfall data in Hulikal for past 8 years in mm 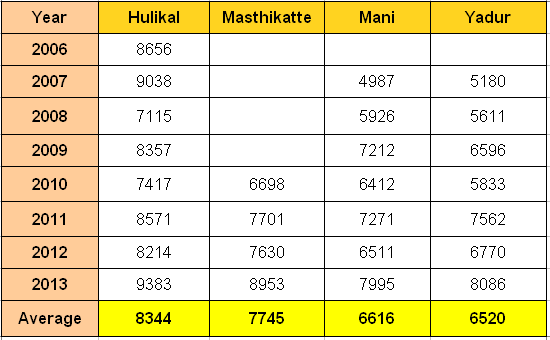 I am sure that Hulikal is wetter than Agumbe. Since, i have daily rainfall of Hulikal from 2008, it always gets more rainfall than Agumbe. However, its a close fight between Agumbe and Masthikatte. In the past 4 years, Masthikatee has beaten Agumbe twice making them even. It has to be seen whether Amgaon in Khanapur taluk is the wettest place in Karnataka or Hulikal. Because in between 2006 and 2011, Amgaon  has got more rainfall 3 times making the contest even.

Source: Compilation from The Hindu, Deccan Herald, Wikipedia and Rainfall data from own research.
Posted by Pradeep at Saturday, January 18, 2014 13 comments:

Background
-----------
The 2013 NEM was unique, there was not even a single Easterly Wave which affected TN. All the easterly waves either intensified into Depression or Cyclones in their early stages itself. TN missed most of the systems and so the rains missed us resulting in 2nd consecutive NEM failure for TN. The Two Depression which crossed TN gave rains for only for 1 day.

1st system - Very Severe Cyclone Phailin (Most Powerful)
-------------------------
The 1st system to form in October was Cyclone Phailin (October 8 to 15) it nearly intensified into Super Cyclone. It went to Orissa/North AP. Tamil Nadu did not get any rainfall from it. Many places in Orissa got close to 500 mm. Technically NEM set in after this Cyclone. The Cyclone killed around 44 people in Orissa. The cyclone 1st made landfall in Mayabunder in Andaman Islands where it pounded 750 mm rainfall in just 3 days.

2nd System - WML in Andhra Pradesh (Dumped record rains and stood like a Rock)
------------------------
The second one was a Well Marked Low Pressure Area (WML) (October 20-28). It formed near TN and moved north to AP. This system gave rains to Tamil Nadu for a day or 2. It nearly intensified into a Depression and was a record WML as it lasted around 8-9 days. Andhra got mammoth rains. Kallingapattnam in AP got close to 800 mm. Even Orissa got very Heavy Rains around 200 mm. The Heavy rains killed  around 50 people in AP.

3rd System - Deep Depression or 2013 Somalia cyclone (Caused the most Deaths)
------------------------
The third system of NEM 2013 was Deep Depression (November 8-15). It was a Low Pressure in Comrin Sea near Kanyakumari. It gave good rains to Tirunelveli, Ramanathapuram, Kanyakumari and Tuticorin districts as a Low Pressure. Ramanathapuram and Papanasam got around 400 mm first week of November. The low pressure then intensified into a Deep Depression, nearly became a named cyclone and moved away from Indian coast and made landfall in Somalia in Africa and killed over 140 people. Bandarbeyla and Eyl in Somalia got around 350 mm rainfall while their annual rainfall was just 250 mm. It was one of the worst cyclone to hit Somalia.

5th System - Severe Cyclone Helen (Surprise of the NEM)
--------------------------
The 5th system was Cyclone Helen (November 19-23)  No one including IMD expected it to become cyclone, however it became a cyclone. Then all models predicted it to weaken and take a loop and cross north of Chennai. However it strengthened and crossed Central AP. It was again a complete miss to TN. It caused widespread  destruction in Andhra Pradesh. Vishakapattannam and may other places in AP got over 200 mm rains. Rains were also witnessed in Maharashtra. It has to be the surprise Cyclone of this season.

6th System - Very Severe Cyclone Lehar (No rains/winds - a dud)
---------------------------
The 6th System was Cyclone Lehar (November 23-28). Hopes in TN soared as all models initially showed TN as landfall. But this cyclone intensified and as usual it moved to AP . It completely gave a miss to TN. It weakened in the sea and crossed Central AP as a very weak system. There were no heavy rains nor any winds. It should be called as the dud of the year.

7th System - Very Severe Cyclone Madi (It made a rare U-turn)
------------------------------------
The 7th System was Cyclone Madi (December 1 to 13). As a low pressure, Ramanathapuram, Tutucorin, Tirunelveli and Kanykumari dts got very good rains with some places getting over 100 mm. However this system also intensified and moved north. All intensified system move north as upper level winds were west to east. But this also weakened and came back to TN in Depression strength. Again it gave rains for only 1 day, Kanyakumari and Villipuram dts got good rains (100 mm). It was also a long lasting cyclone.

Conclusion
-----------
This sums up the NEM 2013. There was no monsoon rains from regular easterly waves nor did any of the low pressure/depression stay in TN for 2-3 days providing rains like the one Low Pressure which gave bounty to AP.  All the rains were associated with cyclonic systems and as most of then intensified early and thereby moving north and giving a miss to TN. As the cyclones move north the regular NE winds got subdued and thereby resulting in failure of NEM to TN. This is the 1st time in the history we had 4 named cyclones between (October - December).

Top Wettest Places in India for the Year 2013

Hulikal is a village located in the Hosanagara taluk of the Shimoga district in the Indian state of Karnataka and is known for its heavy rainfall. It has been fighting for the wettest place in the state of Karnataka, India with Agumbe and Amgaon for a period of time. The real beauty of Hulikal lies in its small waterfalls which come alive during monsoon. These waterfalls take birth during rainy season and vanish after the monsoon. Most of the waterfalls are beside the highway. These temporary waterfalls do not have any name and they are very easily accessible. You can stop your vehicles, spend some time and enjoy with these waterfalls.

The nearby Mashtikatte also gets good rainfall and also beats Agubme at times. (Hulikal and Mashtikatte) are like (Cherrapunji and Mawsynaram) located very nearby Twin wet places.