Please watch out this space for the wettest series. You will be surprised with the rainfall data.

Ponnachi G Son sir,  we discussed a lot in Indian Weatherman few years back on the wettest place in Tamil Nadu and i have answers to your questions. Hope you reply back.

Kaneyen you asked me to come forward to analysis rainfall and distribution in these regions. Taluk wise rainfall distribution based on area weighted average will give clear picture.

http://indianweatherman.blogspot.in/2011/06/heavy-rainfall-and-rainfall.html
Posted by Pradeep at Wednesday, February 19, 2014 No comments: Links to this post

Cherrapunjee is one of the wettest place on earth and is also known as Sohra. It had received only 7560 mm of rainfall in 2013. It is the lowest rainfall in last 35 years and 5th lowest in last 140 years. This town has an average rainfall of 11,070 mm a year. The highest recorded total annual rainfall was 24555 mm in the year 1974. 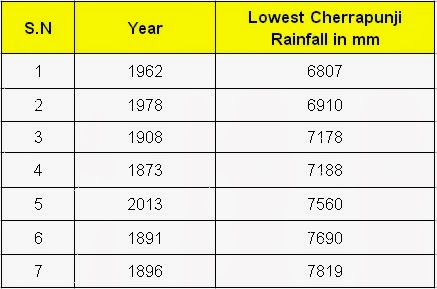 The prime reason for deficit monsoon rainfall over the North-East in 2013 was formation of above normal monsoon low-pressure systems over the Bay of Bengal and subsequent passage of those systems across central India and north peninsula,” said scientist Sunit Das of IMD Guwahati.

However, most residents blamed the degradation of the eco system, with trees felled at the hills for limestone mining and other purposes. There is also water scarcity here these days. People have to walk for miles to collect drinking water. Deforestation, lack of rain harvesting and constant mining are often cited as the reasons.

"We had a thriving tourist traffic here but it is beginning to fall. Specially, the number of foreign tourists is getting less and less," says Banzer Cooper Lyngdoh, an officer with Meghalaya tourism in Cherrapunji. "Tourists come here to see the rain and clouds, so why should they come at all if it is hot and sunny?" Mr Lyngdoh asked.
This year Hulikal in Karnataka has topped the country charts with annual rainfall with 9383 mm in 2013. Mawsynaram, the famed counterpart of Cherrapunji has also got less rainfall of 8610 mm in 2013.

Source of Interviews : Compiled from Various Newspapers
Rainfall data - Own Research
Posted by Pradeep at Tuesday, February 11, 2014 2 comments: Links to this post