Places which has received nearly 400 cm for the year

Posted by Pradeep at Sunday, September 26, 2010 No comments: Links to this post

Email ThisBlogThis!Share to TwitterShare to FacebookShare to Pinterest
Labels: Rainfall

For the small pockets of land in Maharashtra that received very modest rainfall on Saturday and Sunday, its was a man made gift of showers. Four very small pockets of land in Satara (Wadunj) and rural regions of Pune district (Daund, Baramati and Marinagar) received from a maximum of 11 millimeters (mm) of rainfall for 31 minutes on a 12 square kilometer tract of arid land to an almost abysmal 6.5 mm of rainfall for even lesser time.

Why the jubilation then? Because these regions fall within 10 most scarcity-hit districts of Maharashtra with no rains for the last three years. The state government has imported the requisite radar machines and other equipment at a cost of Rs.5.5 crore and hopes to continue creating artificial ‘November rains’ equipped with a Piper Cheyenne plane (light aircraft), armed with hygroscopic salts, for cloud seeding sorties over these and other scarcity hit regions.

Chief minister Sushilkumar Shinde said today: “The artificial rain is the outcome of an agreement signed between the state government and Ms Weather Modification Co through its subsidiary Ms Agni Aviation Consultants (Bangalore) on August 21, 2003. The equipment was imported and became operational on Saturday with the first experiment resulting in 11 mm of rainfall experienced over a 12 square km patch in Satara district for 31 minutes. The next day (Sunday) the same experiment was repeated in the three rural regions where around 6.5 mm of rainfall was recorded.
Cloud seeding is here to stay and will provide a shower of man induced artificial rainfall upon regions bereft of nature’s annual generosity. The state government has set up a control room in the Vidya Prathisthan located in Baramati from where sophisticated radar will monitor the availability of cumulus clouds drifting over the parched landscape that can be targeted and fueled with enough hugroscopic salts (shot into the base of the cloud).

Source: Business Standard
Posted by Pradeep at Saturday, September 25, 2010 No comments: Links to this post

Email ThisBlogThis!Share to TwitterShare to FacebookShare to Pinterest
Labels: Records

Monsoon has created a record of sorts this year. The rainfall witnessed is well on course to be ranked as the highest ever recorded in the city. There have been a number of intense rain spells, yet the city life has not been thrown out of gear even once. The data of monsoon witnessed between 1999 and 2009 indicates that there had been at least two rain days every year when the city life was halted, a senior official from the civic disaster management cell said. The Santa Cruz observatory has witnessed 3,309.2 mm rain this year, while the Colaba observatory has received 3,160.5 mm. A Met department officer said that with there being still some time before the monsoon withdraws, the rainfall-recorded is on course to be the highest ever. According to a senior official, the Santa Cruz observatory had recorded about 3,400mm rainfall in 2005, the year when an unprecedented rain event on July 26 saw a downpour of 944 mm. The second-highest rainfall recorded by the suburban observatory was 3,281.7 mm in 1958. The Met officials also suggested that the Colaba rainfall has already surpassed all rain records set in the past 50 years.

The monsoon rainfall broke a 44-year-old record in Dehra Dun by registering a whopping 3088 mm of rainfall this season. Met Director Anand Sharma told PTI that the previous highest record was in 1966 when the Doon valley recorded 2930 mm of rainfall. Before 1966, records regarding monsoon rains are not available, he said. With heavy rains lashing Dehra Dun, several rivers in the valley were on spate which include Rispana, Bindal and Asan. Nine of the total 13 districts of Uttarakhand have received excess rainfall this monsoon season.

Breaking a 14-year record, Jaipur received 781.2mm rain this year till Wednesday. Going by the Met department’s prediction, as the monsoon is still active in the state and will last till the end of the month, the figure is likely to change in the coming few days. According to officials of Indian Meteorological Department, Jaipur receives around 500 mm rainfall in normal circumstances. The last time it had rained so much was in 1996, when the showers had been plentiful to the point of becoming an abnormality. Jaipur city had then received 850 mm rain between June and September. Looking at the conditions of this year, Jaipur is heading towards and abnormal spell of monsoon. "The district has already received 40% rain in excess of the normal this year," an irrigation official said. The comparison becomes obvious with last year's rainfall chart when Jaipur received less than 300 mm rain and had to be included among the scarcity-hit districts of the state.

Records shows this is the wettest monsoon in Delhi since 1978. Rainfall since June 1 has touched 1004mm higher than 965.1mm recorded during the monsoon of 1978. Sunday's rain also took Delhi's rainfall during September to 250.6mm, the highest since 1998 when 280.4 mm was recorded. Last year, the figure had settled at 588 mm. Delhi recorded 455.1 mm rain in August, more than double its normal average of 225.8 mm. With 10 days remaining in the month, September too is poised to break records having recorded around 280mm more than normal.

Posted by Pradeep at Saturday, September 25, 2010 No comments: Links to this post

Agumbe vs Hulikal - The wettest place in South India 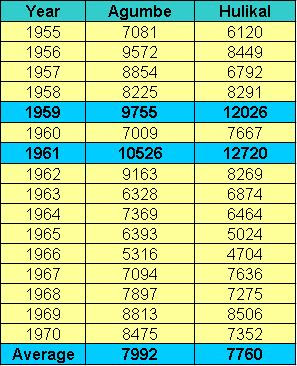 Agumbe in Thirthahalli taluk of Shimoga district is dubbed as the 'Cherrapunjee of the South'. But Cherrapunjee itself is no longer the wettest place on Earth. It lost its crown to Mawsynram, also in Meghalaya.

Only 5 places in India get above 750 cm rainfall. They are Cherrapunjee, Mawsynram, Agumbe, Hulikal & Amboli

In peninsular India its Agumbe which always takes the top spot. A new challenger in the form of Hulikal in Shimoga District has been rumoured to get more rainfall. A comparison of rainfall from 1955-1970 shows that there is nothing between the two places with Agumbe getting average rainfall 0f 799 cm while closely followed by Hulikal at 776 cm. But in terms of Intensity its Hulikal twice crossing 1200 cm mark in 1959 & 61. IMD has to publish these two stations data for the recent years through which a comparative study on these rain forest stations can be made. 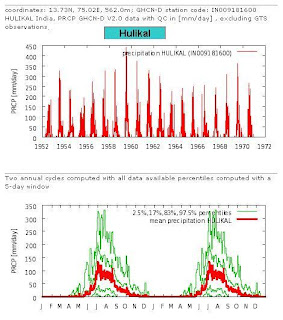 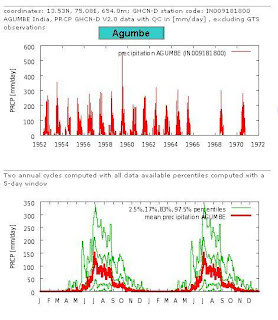 Many stations in Kerala, Karnataka, Maharastra, and North East would have crossed 250 cm. Its very time consuming in calculating the rankings from the archived data.
Posted by Pradeep at Thursday, September 09, 2010 1 comment: Links to this post

Email ThisBlogThis!Share to TwitterShare to FacebookShare to Pinterest
Labels: Rainfall

All India Top SWM Rainfalls, over a limit of 2000mm

Posted by Pradeep at Thursday, September 02, 2010 No comments: Links to this post