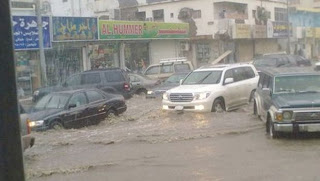 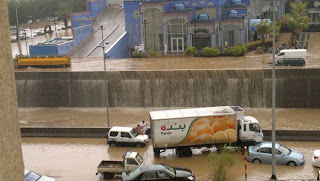 The average amount of rain during the winter months (November to January) is about 51 mm. He said what Jeddah is presently witnessing is due to climate change. As of Wednesday afternoon, reports of three electrocuted teens, hundreds of stranded students and a broken dam were pouring in from different parts of the city. Civil Defense officials, however, said there were yet no reports of any deaths related to the flooding. 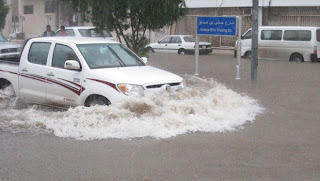 Eyewitnesses told Arab News that East Jeddah was swamped and floodwater was rushing west toward the Red Sea, turning streets into rivers once again. Witnesses say Um Al-Khair dam has been breached, flooding nearby neighborhoods. Water in Al-Hamra district was waist-deep in some places and some schools were keeping students from leaving. The heavy downpour did not begin until after students went to class where they are currently taking end-of-semester exams. 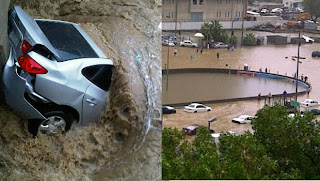 Unconfirmed reports came in saying three female students were electrocuted at KAU. It was not immediately clear if any of the young women were killed in the accident. Palestine Street, Madinah Road and Wali Al-Ahad Street were either flooded or jammed with traffic. Cars were seen floating in some places. Three hundred students at Dar Al-Hekma were still held up inside the college. At Effat College the situation was the same. Civil Defense advised tudents not to leave the premises and wait till the floods subside. Civil Defense officials, meanwhile, urged the public to stay home if there was no urgency to venture outside.

Posted by Pradeep at Thursday, January 27, 2011 No comments: Links to this post