Earthquakes and what one needs to know - Tamil Nadu Weatherman Special

I am not a Geologist and whatever i tried to compile here is from various sources and is done of personal capacity. For some years now, like rainfall i have been collecting data on earthquakes. I have some fair idea of them. Please dont reply who are you to put this update like last time. People need to know what earthquakes have hit Tamil Nadu in the past and intensity. This update is put based on request and also the recent news that an major Earthquake is expected in North East India has created a major interest among public about earthquakes. I have tried to keep as simple as possbile without and technical explanations.

What causes earthquakes to happen and Where the Major Plates and Minor Plates in world ?

Movement of the plates and their collision causes earthquakes. Of course, this is true in the larger perspective and the earthquake occurrences in Indian plate boundaries like Himalayan belts, Kashmir, Gujarat, North East India and Andaman Islands can be explained. But as far as south India and Tamil Nadu is concerned, all the earthquakes have not occurred in plate boundaries because we are not in fault lines, but only within a plate and hence it doesnot mean earth quakes will occur only at fault lines, that idealogy should be changed. But yes major and frequent earthquakes occur only in the fault lines where two plates collide. The major plates in the world is posted below and you can wonder why Himalayas,  Kashmir, Gujarat, North East and Andaman get frequent earthquakes.
The Indian plate has some minor plates and no wonder the Andaman - Indonesia belt gets some daily earthquakes due to a small micro plate called the Burma Plate at one point three plates meet near Indonesia.

Does Earthquake Occur only in Fault Lines or along the edges of plates ?

The Indian subcontinent has a history of earthquakes. The reason for the intensity and high frequency of earthquakes is the Indian plate driving into Asia at a rate of approximately 49 mm/year. The following is a list of major earthquakes which have occurred in India. 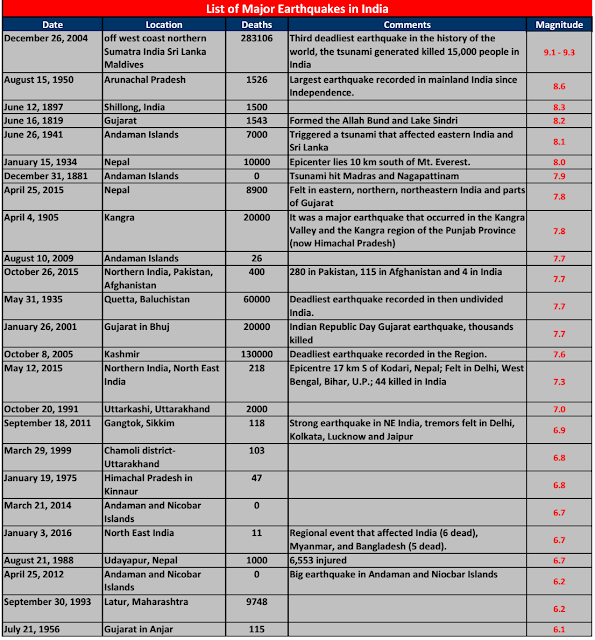 Now lets come to Tsunami and what type of Earthquake causes it ?

Tsunami can be generated when the sea floor abruptly deforms and vertically displaces the overlying water. A tsunami can be generated when thrust faults associated with convergent or destructive plate boundaries move abruptly, resulting in water displacement, owing to the vertical component of movement involved. Tsunamis have a small amplitude (wave height) offshore, and a very long wavelength (often hundreds of kilometres long, whereas normal ocean waves have a wavelength of only 30 or 40 metres), which is why they generally pass unnoticed at sea, forming only a slight swell usually about 300 millimetres (12 in) above the normal sea surface. They grow in height when they reach shallower water, in a wave shoaling process described below. A tsunami can occur in any tidal state and even at low tide can still inundate coastal areas.

Dip-slip Reverse faults, also called thrust faults, slide one block of crust on top of another. These faults are commonly found in collisions zones, where tectonic plates push up mountain ranges such as the Himalayas and the Rocky Mountains. 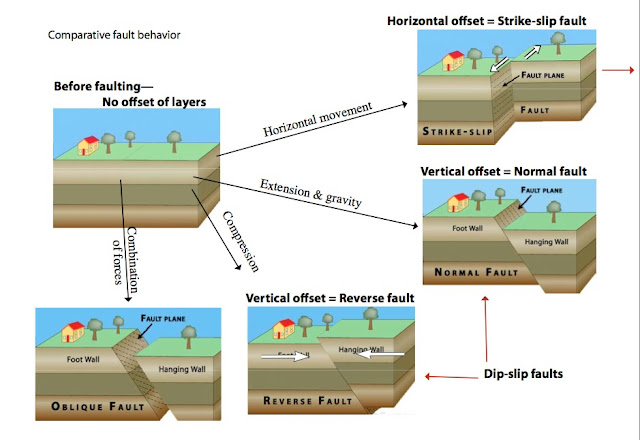 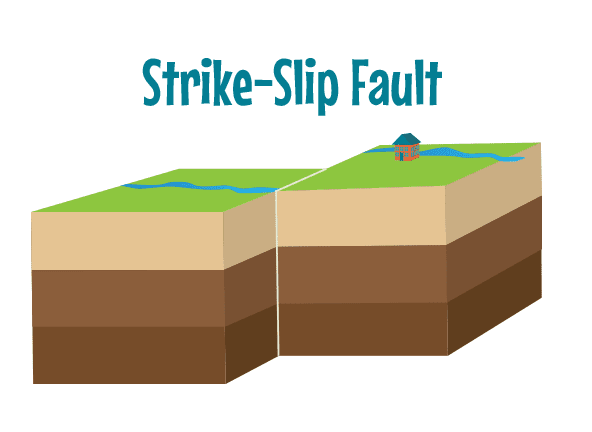 Tsunami is new in India. Sad that our Geography books did not teach us anything about Tsunami prior to 2004 event. I have compiled some of the tsunami events which affected the Indian coast in the last 250 years. 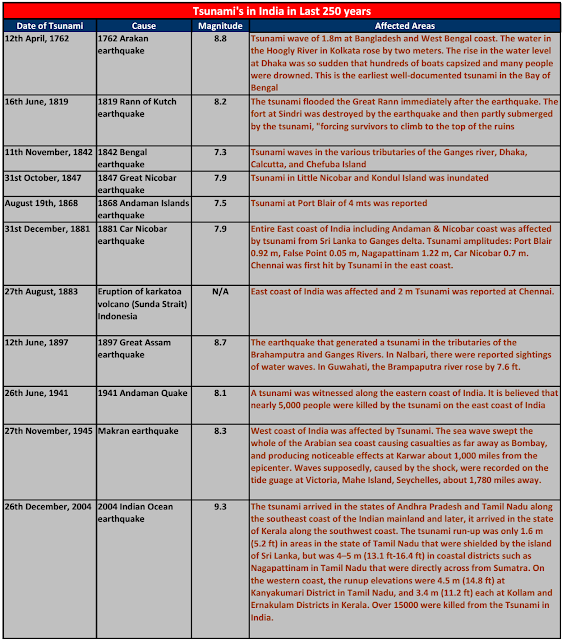 However, Earthquakes with magnitude 8.0 or greater (such at the 1941 and 2004 events) associated with "dip-slip" types of vertical crustal displacements along thrust faults have the potential of generating very destructive tsunamis in the entire Bay of Bengal Region the Andaman Sea and the Indian Ocean.

Earthquakes with epicenter in Tamil Nadu

GSHAP or the Global Seismic Hazard Assessment Program has prepared the Global maps for sesmic activity. Coimbatore and Nilgiris fall in moderate hazzard zone while Chennai and Pondycherry fall in low hazzard zone. Here is the map for India and Tamil Nadu 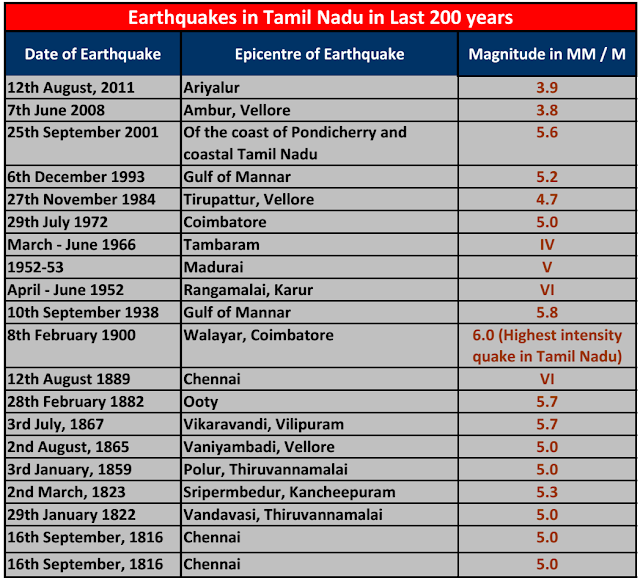 The sesmic zones and the places of earthquakes in Tamil Nadu is given below. As you can see only one quake managed to cross 6.0 scale that was in coimbatore 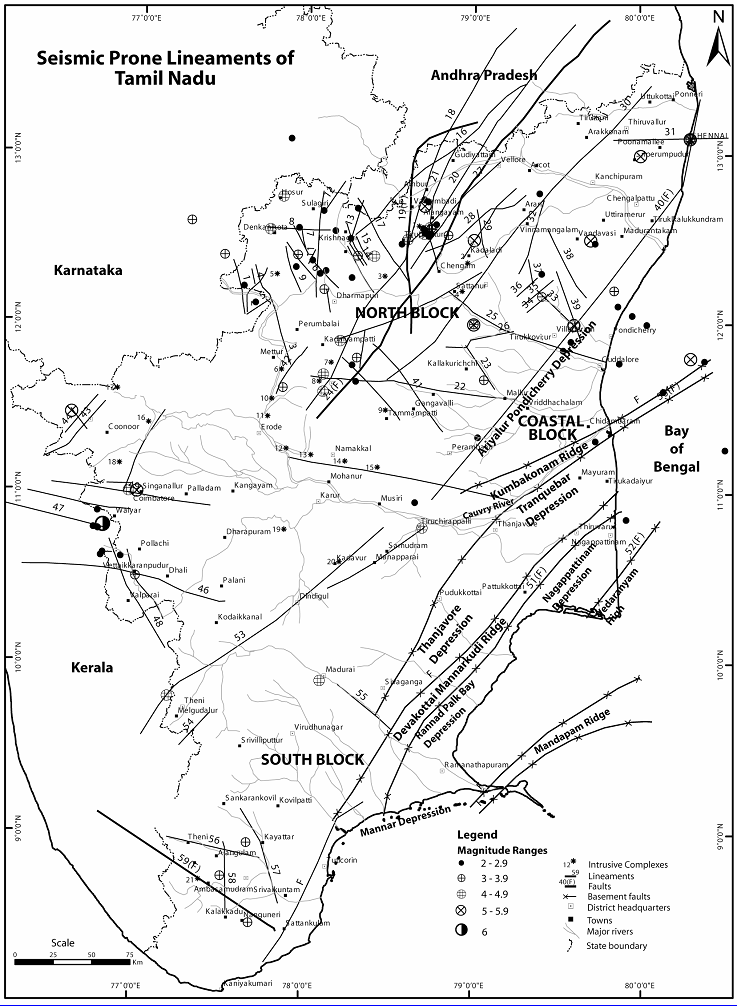 The tremors are sometime felt in Chennai from far away powerful earthquakes and i still remember in the last ones in 2012 and 2009 when we ran out from our offices at T.Nagar 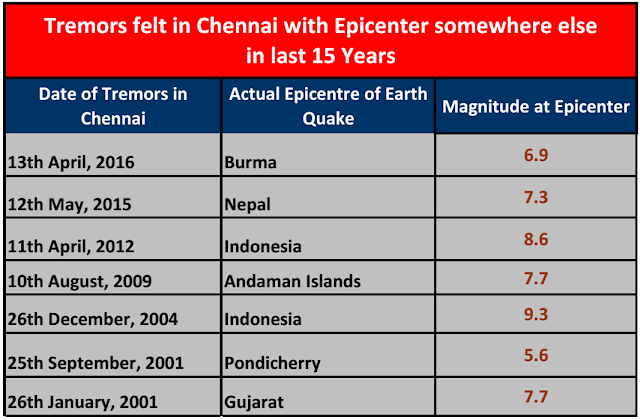 The intensity scales and the level of destruction is given below. 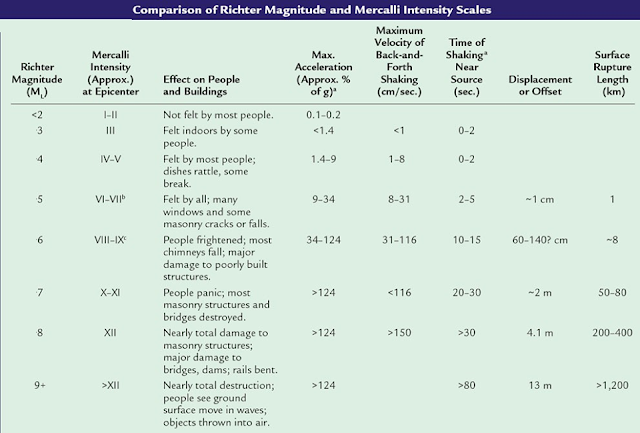 I think you can also tell with stats that there is going to happen a major earthquake within the fault lines of Indian Plate in Northeast / North India along Himalayan belt, when it happens you can claim that you have predicted it. As for as Tamil Nadu is concerned, we fall in intraplate zone. It is impossible and there is not even 1% chance to predict earthquakes here. Only God knows. If someone says there will earthquakes in Tamil Nadu tell them, its impossible. If they say for north east India or Indonesia. Tell them, yeah its in fault line and obviously one big quake is bound to happen now and then.

Email ThisBlogThis!Share to TwitterShare to FacebookShare to Pinterest
Labels: Earthquake

It took solid 3 days to compile this from over 10000 stations and some i have to maintain in excel sheet and i feel relieved at last to complete the job. Cherrapunji at 1798 mm, World No.1 wettest place Mawsynaram at 1860 mm, Kitwade at 1805 mm, Mahabaleshwar, Chinnakallar (king of Tamil Nadu), Gaganbawda, Kuttiyadi, Gavali, Amgaon all failed to make the cut-off. Hulikal which is King of South India is not working and Talacauvery readings not available. Open the image in new tab for higher clarity. 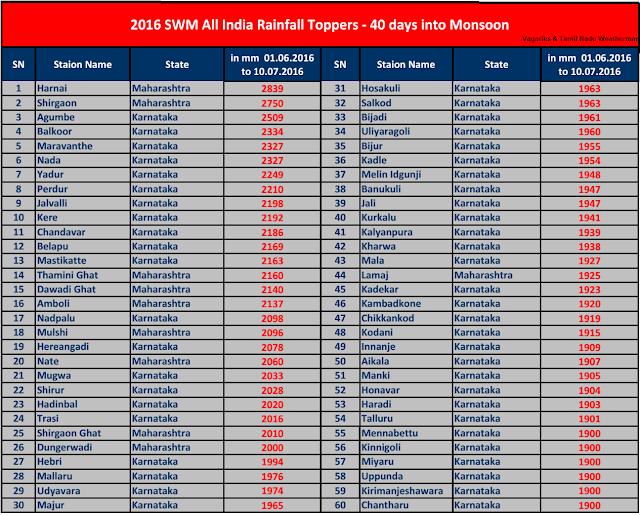