It was three days continuous rain in Uttrakhand which created the historic floods and not cloudburst as termed by media. Hope they come to their senses while posting these terms. 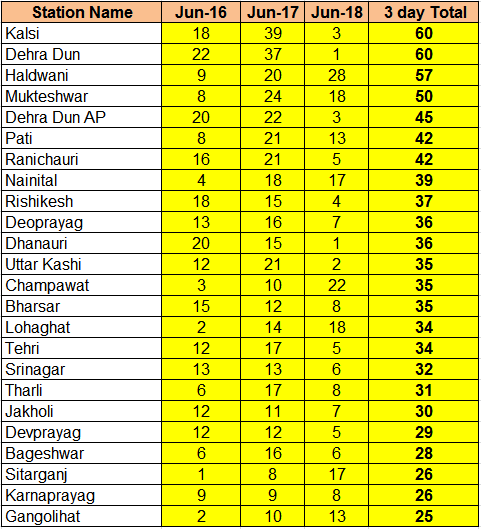 Whenever people in India ask for wettest / Rainiest places they only know Cherrapunji or Mawsynaram or Agumbe. In these series, you will come to various places which i have identified to be wettest places of India. This series will be published often. If you are fan of Heavy Rains and want to know more than Cherrapunji. Please Read it. Its only a compilation of data from various sources / articles / research materials.

Dhar et al (1978) carried out a study ot the heavy rainfall stations in India. For the purpose of the study, stations with mean annual raintall of 5000 mm were considered as heavy rainfall stations. Of the total 14 stations across India, Only two were from KeraIa namely Neeriamangalam (5880 mm) and Peermade (5000 mm). The rainfall data was available only for less number of years. Over the years the averages have caught up with these two stations and their averages have fallen less than 5000 mm considerably. But rain gauges were installed at many other locations which were experiencing very heavy rains during the monsoons.With the data obtained and analysed, these stations were experiencing more rainfall than Agumbe (7640 mm) called as Cherrapunji of South India. One such place is Silent Valley where Walakkad gets the maximum rainfall.

Silent Valley with 236.74 square kilometres is located in the Nilgiri Hills, Palakkad District in Kerala, South India. The park is one of the last undisturbed tracts of South Western Ghats mountain rain forests and tropical moist evergreen forest in India. It is part of The Western Ghats World Heritage Site. 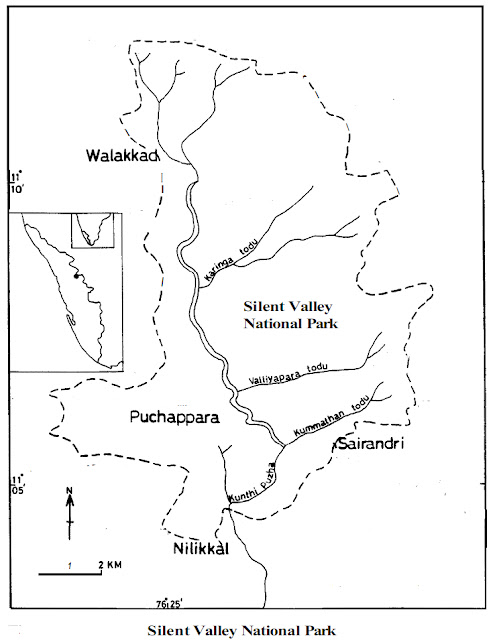 The Silent Valley is a small plateau located on the southwestern corner of the Nilgiri Hills, a part of the Western Ghats hill chain in southern peninsular India. This forested plateau is the point of origin of the Kunthi river which joins the west-flowing Bharathapuzha. The Silent Valley also forms the core area of the Nilgiri Biosphere Reserve. Silent Valley symbolizes hope for all the people who stand up for nature, and remains a beacon for rainforests everywhere. Thus it is no longer merely the name of a place but part of a universal vocabulary as a word that indicates an untrammeled wilderness that would last beyond human greed and willful destruction, and protected through the efforts of the people sustained by hope. 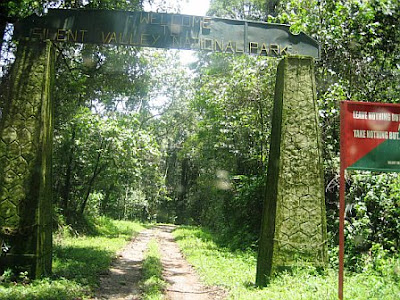 The conservation of entire Silent Valley forest area is vital to ensure the perennial flow of water through the Bharathapuzha, the Bhavani and the Cauvery providing water to Kerala, Tamil Nadu and Karnataka. The Kunthipuzha, which originates from the Silent Valley National Park area, is the main source of water for Bharathapuzha, Kerala’s longest river. It provides drinking and irrigation water to the districts of Palakkad, Malappuram and Thrissur. A tributary of the Bhavani that originates on the eastern side of the Silent Valley forest area is the perennial source of water for this major inter-State river. Its protection is vital for drinking water and irrigation water projects in a couple of districts of Tamil Nadu. It later empties into the Cauvery. Thus the protection of the Silent Valley and its adjacent forests that form the core area of the Nilgiri Biosphere is vital for the peaceful sharing of the water sources of three major rivers by the three neighboring States. This major benefit to the people of three States is the best justification for the struggle for the protection of the Silent Valley.

The Park comprises essentially two parallel south-sloping valleys. The western Kunthi valley is part of the basin of the west-draining Bharathapuzha. The eastern, Bhavani Valley is part of the basin of the east-flowing Cauvery. In the estimation of scientists, the Silent Valley evergreen rainforest is more than 50 million years old. It is perhaps the only remaining undisturbed tropical rainforest in peninsular India. The flora and fauna here are quite unique. The Silent Valley’s dark and cool ambience, vibrating with life, has been described as “the richest expression of life on earth” and a “cradle of evolution.” “Silent Valley is not just an evergreen forest, it is a very fine example of one of the richest, most threatened and least studied habitats on earth.” Thus, it is the “sacred grove” for the world, and a gene pool of rare flora and fauna. This precious chunk of dense forest is perhaps India’s last, largest and oldest tropical rainforest remaining undisturbed, undisturbed because of its relative inaccessibility, oldest because its age is estimated to be 50 million years.

One of the Wettest Rainfall belts in India
The Silent Valley experiences majority rainfall in south-west mosnoon and the comparatively less north-east monsoon. Months were classified into four seasons. December, January and February months are identified as winter season having least rainfall (9.12 mm) and March, April, May with relatively low rainfall (2.59 mm) as driest and warmest months constitute the summer. June, July, August months are extremely different from all other months having highest rainfall (4407 mm). They form the monsoon season. September, October, November months were marked with moderate rainfall (1654 mm).


The Silent Valley gets continuous rain for six to seven months a year. In the remaining months, mist shrouds the valley, which is estimated to yield 15 per cent of the water generated in the rainforest, with both the North-east and South-west monsoons blessing the valley. 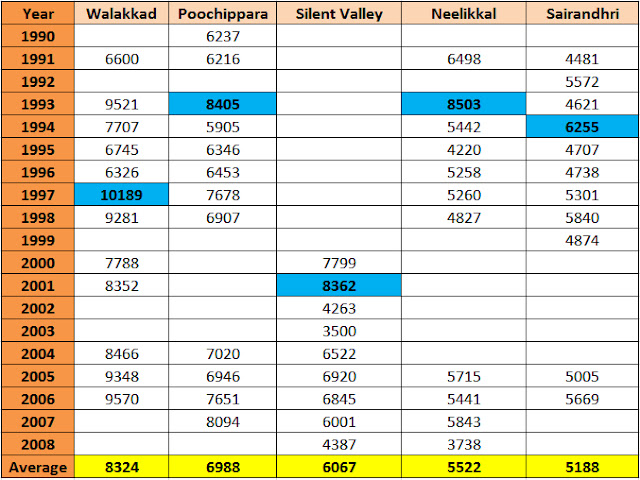 Source: Compilation from The Hindu, KFRI, Wikipedia and Rainfall data from own research.
Posted by Pradeep at Sunday, June 30, 2013 6 comments:

Talacauvery becomes the first station to cross 2000 mm rainfall in 26 days for the 2013 monsoon. 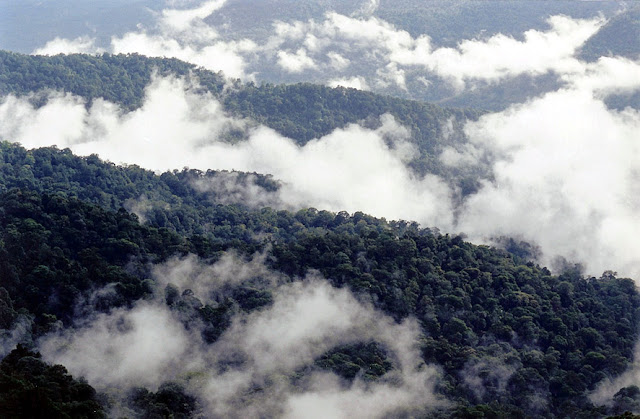 Talacauvery (meaning head of Cauvery) is the place that is generally considered to be the source of the river Cauvery. near Bhagamandala in Kodagu district, Karnataka. However, there is not a permanent visible flow from this place to the main rivercourse except during the rainy season.  A tank or kundike has been erected on a hillside, at the place that is said to be the origin. It is also marked by a small temple, and the area is frequented by pilgrims. The river originates as a spring feeding this tank, which is considered to be a holy place to bathe on special days. The waters are then said to flow underground to emerge as the Cauvery river some distance away.  Talakaveri is about 8 km away from Bhagamandala and 48 km from Madikeri.


This data is only for Vagaries and Tamil Nadu Weatherman blogs. I kindly request you to put source of this blog, in case you are trying to copy and paste the above in any other blog or website.
Posted by Pradeep at Sunday, June 23, 2013 2 comments:

It's 'burning hot' in wettest place on Planet Earth - Cherrapunji

It has been raining cats and dogs in India's northern states, but Cherrapunjee (renamed Sohra) - known as one of the wettest places on the earth - nestled in the abode of clouds in Meghalaya in is "burning hot" at over 28 degrees Celsius! Residents of the hilltop in northeastern India say their heavenly abode is hotter and drier than ever before - due to global warming. 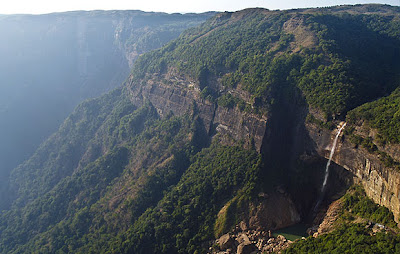 "Sohra has been burning hot for months. In the past, we used umbrellas only to shield ourselves from the rains, but these days you will find everyone in this town carrying an umbrella to protect them from the scorching sun," Merilang Syiem, a resident, told IANS. Not only umbrellas, Syiem said, people in some houses have also started using fans to beat the heat.

Cherrapunjee is on the edge of a plateau on the southern slopes in the East Khasi Hills district. Located 1,290 metres above sea level and 56 km from state capital Shillong, it is known to receive the highest rainfall in the world.This town records an average rainfall of 12,000 mm a year, with the maximum occurring over the southern slopes of the Khasi Hills. The highest recorded total annual rainfall was 24,555 mm in 1974."But that will never happen again, though we still get much rain during the monsoon. But, earlier, we got rains here even during the winter and that is not happening any more," said Lastborn Kharkongor. Heavy rains have created rare bio-diverse vegetation here and made the town a high point of tourism in the state.

An India Metrological Department official said the mercury has been on the rise and was at 28.3 degree Celsius on June 12. "It is true that the temperature at Cherrapunjee was above normal (average) for the last few days. This may be attributed to the weak monsoon activity that prevailed over our region for the last few days," said Sunit Das, a meteorologist in the Regional Meteorological Centre, Guwahati.

The average temperature in Cherrapunjee in June is 23 degrees Celsius. "When we talk about the rainfall, from June 1 till today (June 18), Cherrapunjee received 618.8 mm of rainfall against its normal (average) 1,509.2 mm. Actually, during the advancement phase of southwest monsoon, sometimes the rainfall activity becomes subdued over our region." Das was, however, hopeful of the monsoon picking up by Thursday.

Wind speeds recorded in India during the Nor'wester 2013 Season.

During the hot weather period i.e from March to May the eastern and North-eastern states of the subcontinent like West Bengal, Bihar, Assam, Orissa (parts) and Bangladesh experience dramatic appearance of a special type of violent thunderstorm know as Nor’wester. In Bengal it is known as ‘Kal Baisakhi’ or calamity of the month of Baisakh (April,15-May,15). Apart from its destructive effects like sudden rise in wind speed, lightning, thunder and hail the rainfall associated with the storm.

For the occurrence of a nor’wester, the lower level moisture flow from the Bay of Bengal is essential. In the summer months the atmosphere becomes unstable due to intense insolation. On such days if there is a suitable synoptic situation such as a surface low pressure area over Jharkhand and adjoining districts of Gangetic West Bengal, the cyclonic vorticity reaching up to 1.5 kilometers above sea level with dry air aloft and presence of a jet stream between the levels 300 mb and 200 mb in the vicinity of Gangetic West Bengal are extremely helpful for the occurrence of nor’westers..

Alipore is the king of Nor'wester in India in 2013