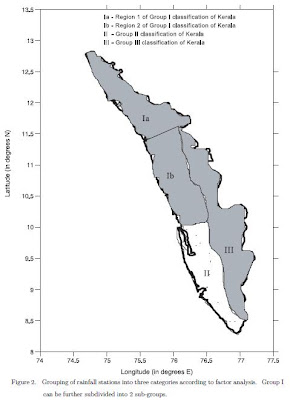 The south-west monsoon current, which brings in most of the annual rainfall to Kerala, gets a forced ascent at the Ghats and the windward slopes experience very heavy rainfall. However, rainfall is not uniformly distributed on the windward slopes and there are pockets of very heavy rainfall and relatively less rainfall. The coastal region of the state also receives abundant rainfall. The results suggest that Kerala can be divided into three unique rainfall regions, each region having a similar covariance structure of annual rainfall. Stations north of 10.N (north Kerala) fall into one group and they receive more rainfall than stations south of 10.N (south Kerala). Group I stations (table 2) receive more than 65% of the annual rainfall during the south-west monsoon period, whereas stations falling in Group II (table 3) receive 25-30% of annual rainfall during the pre-monsoon and the north-east monsoon periods. Group III stations (table 4) with IIIrd factor as the primary loading, i.e., IIIrd factor greater than Ist and IInd factor. The meteorology of Kerala is profoundly influenced by its orographical features, however it is difficult to make out a direct relationship between elevation and rainfall. Local features of the state as reflected in the rainfall distribution are also clearly brought out by the study. The classification of Kerala according to the important factors is given in figure 2. 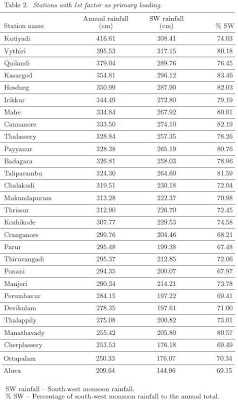 There are 28 rainfall stations in Group I, which can be again classified into 2 according to the contribution of south-west monsoon rainfall (see regions Ia and Ib in figure 2): Stations receiving more than 75% of the annual rainfall during the south-west monsoon, and stations receiving 65-75% of the annual rainfall during the south-west monsoon season. All these stations are situated north of 10.N (north Kerala) and receive more rainfall than stations south of 10.N (south Kerala). This division into north and south Kerala arises from the fact that monsoon rainfall progresses from south to north along the west coast of India and there are differences in the rainfall characteristics between the southern and northern parts of the state. An examination of the monthly rainfall pattern shows that rainfall is highest in June south of 10.N while north Kerala experiences the highest rainfall in July. With each surge in the monsoon current,rainfall is more in north Kerala than in the south and the frequency of surges is higher in July than in June. The active spells of monsoon are also more in July and August. Further, under weak monsoon conditions there is divergence over south Kerala causing little or no rain, while there is convergence resulting in rain over north Kerala on many occasions. 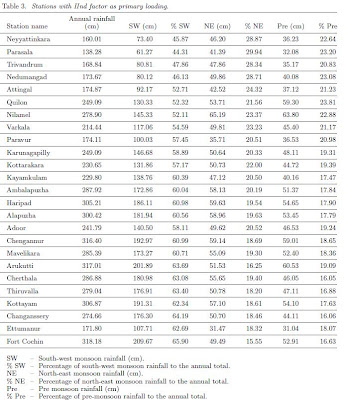 South Kerala stations have the second factor as the primary factor and there are 26 stations in Group II. All these stations receive 25-30% of the annual rainfall during the pre-monsoon and north east monsoon season. (i) Precipitation during pre-monsoon is mainly from thundershowers and there is an increased thunderstorm activity in the southern tip of Kerala state from March onwards increasing progressively with the advance of the season. May makes the maximum contribution to the rainfall of the pre-monsoon period (March - May). The south-west monsoon advances over south Kerala between 11th and 31st May in nearly 50% of the years, and this is a contributory factor for the pronounced rainfall maximum over south Kerala during this season.

(ii) Most of the rainfall during north-east monsoon is closely associated with the westward passage of storms and depressions, which are remnants of low pressure systems that move into the Bay of Bengal. The tapering shape of the peninsula and the lower elevation of the Western Ghats in the south are the main reasons for rainfall during this season in south Kerala. 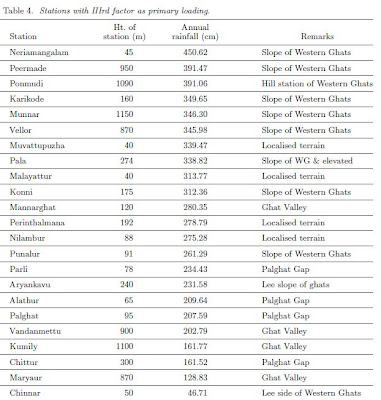 The meteorology of Kerala is profoundly influenced by its orography. This is reflected as the third factor in the factor analysis. Of the 77 stations, 23 stations have this factor as the primary loading. Even though these stations have the third factor as their primary loading, all these stations do not have the same rainfall pattern and can be classified into three groups. (i) There are 8 stations that receive very heavy annual rainfall (> than 336 cm) and are located on the windward slope of the Ghats. On the windward side of mountains, moist air is forced up the slope, where it cools and condenses, leading to precipitation. These peaks also provide convection points of instability. This instability will be triggered when the orographic lifting is strong enough to force air parcels to ascend to their level of free convection. Thus, the heavy rainfall over the windward slopes depends not only on the elevation of the station but also on the wind velocity perpendicular to the mountain range and on the moist static stability.

(ii) There is a second group of stations that receive normal annual rainfall and has the third factor as their primary loading factor. The local features of the stations are also significant in this factor. For example Punalur a station in south Kerala is surrounded by rocky terrain on its four sides and this station experiences very high thunderstorm activity.

(iii) Stations that lie on the leeward slope of the Ghats and stations situated in the Palghat Gap receive very less mean annual rainfall (less than 224 cm) and load primarily on the third factor. Air flowing across a mountain range will be forced upwards, and therefore it cools and produces local precipitation. When the air reaches the other side of the range, it's been effectively "wrung out" and tends to be dry. This produces a "rain shadow" effect on the lee side of mountains (the side away from the wind direction) where it tends to be dry. 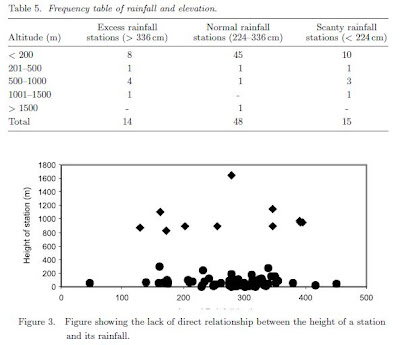 The complex relationship between topography and precipitation in mountainous regions is evident in the pattern of rainfall distribution. A frequency table showing the rainfall and elevation is illustrated in table 5. Stations are classified according to their elevation into 5 groups. The normal rainfall of Kerala for the period of study is 280 cm and stations having rainfall greater than 20% of the state normal (i.e., greater than 336 cm) are classified as excess rainfall stations and those having rainfall less than 20% of the state normal (i.e., less than 224 cm) are grouped as scanty rainfall stations. It can be seen from table 5 that while there are 4 excess rainfall stations with elevation between 500m and 1000m 3 stations with the same altitude experiences only scanty rainfall. Figure 3 illustrates the rainfall versus the elevation of each station. It is evident from the figure that it is difficult to make out a direct relationship between elevation and rainfall. The spatial variability of mean annual precipitation depends upon the topographic factors like exposure of the station to the prevailing wind, elevation, orientation, and slope of the mountain.